VIDEO: No 29 Squadron in AFM

The April issue of AFM, on sale now, includes the first of a two-part feature, visiting No 29 Squadron at RAF Coningsby to learn how the Royal Air Force trains new Eurofighter Typhoon pilots.  While on the base, the AFM team had the chance to capture these videos:

No 29 Squadron is the RAF’s Typhoon Operational Conversion Unit (OCU) and its biggest fast jet squadron.  It has 18 aircraft on its books, 25 Qualified Flying Instructors (QFIs) and it typically runs three or four concurrent pilot training courses, as well as training brand new engineers.  It’s also the home of the Typhoon Qualified Weapons Instructor (QWI) course – the highest level of qualification an RAF officer can achieve.

The issue of how to train a Typhoon pilot is complex.  For the young flyers arriving at the OCU, a lot of the ‘how to fly an aeroplane’ has already been dealt with in the earlier phases of training, albeit the Typhoon clearly represents a serious step-up in raw performance.  What happens here at No 29 Squadron is more about how much exposure a young pilot gets to the advanced mission systems in this sophisticated fighter and how the unit can fully harness the promise of these new fighter pilots to best support the British defence enterprise.  A committed and rapidly evolving front line places significant demands on the squadron, and working alongside his team, the Typhoon Force Headquarters and Standards Evaluation (STANEVAL) at Coningsby, there is a raft of complex factors influencing how No 29 Squadron conducts its business.

A constantly evolving picture at the OCU mirrors the Eurofighter’s capability journey.  From a narrowly focused aircraft that was initially conceived and inducted into service as a pure air-to-air fighter, it has moved into ‘swing-role’ and is now on the cusp of becoming one of the most versatile fast jets on the planet with the realisation of the RAF’s ambitious Project Centurion.  This will give the Typhoon all the tools of the Tornado GR4, which bows out of service next year.  Factor in two significant combat events: in Libya in 2011 and today in Operation Shader over Iraq and Syria.  Export sales drives – typically underpinned by RAF training and operational support – mean that a range of foreign students regularly arrive at the OCU.  This squadron is a clear illustration of the close partnership between industry and the RAF – it’s the ‘Whole Force’ concept at work and apparently thriving.  All together, No 29 Squadron has many facets and a host of influencing factors that come into play each and every day.

The April issue of AFM is available from all good newsagents, from our online store, and as an app. 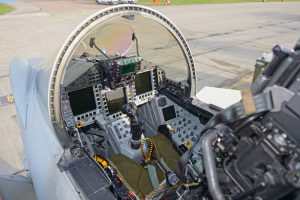 The prize – the cockpit of the Typhoon.  The layout of the Hawk T2 cockpit is almost identical to the Typhoon, designed to smooth the transition between the two.  Jamie Hunter 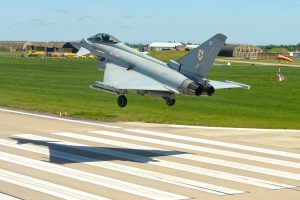 Pilots build their experience of handling the jet in the circuit by bookending combat trips with some of the more routine work around the airfield.  Jamie Hunter