US approves F-35A sale to Belgium

The US State Department has approved a possible foreign military sale of 34 Lockheed Martin F-35As to Belgium, the agency announced on January 19.  Worth an estimated $6.53bn, the potential deal still requires Congressional approval.  The announced package includes 38 Pratt & Whitney F135 engines, including four spares, plus electronic warfare and command and control systems and the Autonomic Logistics Information System (ALIS).

The F-35A will face competition from the Dassault Rafale and Eurofighter Typhoon.  While BAE Systems submitted a proposal to the Belgian government last October, the French government instead offered an economic package worth €20bn over 20 years should Belgium decide in favour of the Rafale.

On March 17 last year the Belgian Council of Ministers agreed to launch the call for tenders for the successor to the F-16.  Delayed from its scheduled 2015 release, the Request for Governmental Proposal (RfGP) was sent to five state agencies, each representing a combat aircraft type, and covering a potential purchase of 34 aircraft for service entry in 2023.  According to Minister of Defence Vandeput, the initial purchase value is €3.57bn and the intention is to sign a contract in mid-2018.

The original five contending fighters included two from the US, where the US Navy Program Manager 265 office offered the Boeing F/A-18E/F Super Hornet, and the Joint Program Office offered the F-35 Lightning II.  The French defence ministry offered the Dassault Rafale F3R, the Swedish Defence Materiel Administration the Saab JAS 39 Gripen E/F and the British MOD promoted the Eurofighter Typhoon.

The RfGP defines the general framework of the replacement under the Air Combat Capability programme, explaining the process, procedures and deadlines, and reporting technical and operational requirements.  The Belgian government wants a state-to-state partnership agreement with the supplier country.  The definition of the future Partnership Memorandum of Understanding is also specified with quantified demands on the costs of the acquisition of the equipment, but also of associated equipment (weapons) and the implementation and training of pilots and technicians.

The RfGP considers various operational scenarios informed by operations in Iraq and Afghanistan, as well as the air-to-air threats potentially posed by Russian and Chinese fighter jets and drones.

Surface-to-air threats are also defined, including Russian and Chinese, as well as US and European systems.

The question of whether or not to maintain the F-16’s nuclear strike capability in a successor aircraft is not addressed in the Belgian defence ministry’s 270-page document.  Vandeput said he would respect the Belgian government’s decision on this matter, recognising it as a key issue in the contract.

On April 19 it was announced that Boeing had decided to withdraw from the competition.  A short statement from the company said: “Boeing informed the Belgian government that it will not participate in its bidders’ conference today, nor respond to the request for proposals for a new fighter aircraft.  We regret that after reviewing the request we do not see an opportunity to compete on a truly level playing field with the extremely capable and cost-effective F/A-18 Super Hornet.  This decision allows Boeing to concentrate its efforts and resources on supporting our global customers, securing new orders and investing in technology and systems required to meet the threats of today and tomorrow.  Where there is a full and open competition we look forward to bringing the full depth and breadth of the Boeing Company to our offer.”

Questions remain about the F-16 replacement.  First, the role Belgium can play in deployed operations with a fleet of only 34 aircraft is debatable.  Second, it may be asked why Lockheed Martin’s new F-16V is not included among the contenders, considering the Fighting Falcon’s years of success with the Belgian Air Component.

For more on the Belgian Air Component F-16 force, including recent operations against so-called Islamic State in the Middle East, take a look at the August issue of AFM, available here. 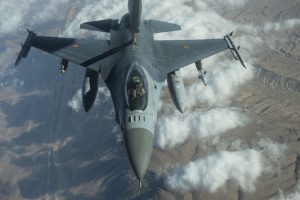