No 22 Squadron, based at Hashimara in the eastern state of West Bengal, was the last unit flying non-upgraded Hindustan Aeronautics Limited-built MiG-27ML strike aircraft. Raised in October 1966 as a Folland/HAL Gnat unit at Bareilly in the northern state of Uttar Pradesh, the squadron took part in the 1971 liberation of Bangladesh, being awarded Battle Honours for its role in the conflict. The squadron was re-equipped with the HAL Ajeet, a local modification of the Gnat, in 1982. In 1990, No 22 Squadron moved to Hashimara and converted to the MiG-27 (with MiG-23UB trainers).

With retirement of the MiG-27ML and numberplating of No 22 Squadron, the IAF is now down to two squadrons of domestically upgraded MiG-27UPGs, No 10 Squadron ‘Winged Daggers’ and No 29 ‘Scorpions’. 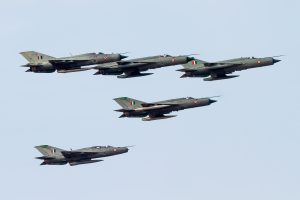 No 108 Squadron, based at Nal in the western state of Rajasthan, was one of two remaining MiG-21M units when its disestablishment was announced, the other being No 35 ‘Rapiers’. No 108 Squadron was raised on Vampires in November 1959, taking these to war with Pakistan in 1965. In 1968, the Hawkeyes transitioned to Su-7s, with which they went to war again in 1971. The unit was among the first IAF Squadrons to receive Soviet-built MiG-21MFs in 1973, before converting to HAL-built MiG-21Ms in later years. The ‘Hawkeyes’ went to war for a third time on a third aircraft type in 1999, carrying out day and night strikes with their MiG-21Ms during the Kargil conflict.

No 108 Squadron’s last flights were conducted with a little more fanfare than 22 Squadron’s – with the Chief of Air Staff, Air Chief Marshal Birender Singh Dhanoa, flying the squadron’s final sortie in a MiG-21UM trainer. The Air Chief is a qualified and current MiG-21M pilot and last flew solo in January 2017 (see AFM, March 2017). 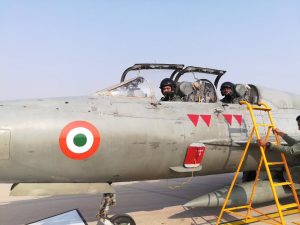