Cover stars of the January issue of AFM – now available in the shops and from our online store – are the  ‘Black Knights’ of the Royal Air Force’s No 17 (Reserve) Test and Evaluation Squadron, photographed by Jamie Hunter.

The squadron, which is part of the F-35 operational test team at Edwards Air Force Base, California, is profiled in the first of a series of features marking the centenary of the RAF in 2018.

As the only Tier 1 partner in the F-35 programme, the United Kingdom is intrinsically linked to the development of the Lightning II, especially the short take-off and landing (STOVL) F-35B, the variant being procured for the UK Lightning Force.  Experience with the Harrier and the expertise of British industry in this field led to a key role in the development of the STOVL elements of the F-35B.  Indeed, BAE Systems test pilot Graham Tomlinson was at the controls for the maiden flight of the first F-35B on June 11, 2008. 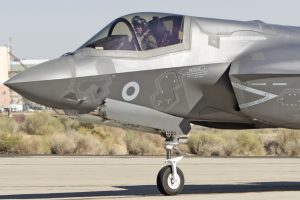 No 17(R) TES stood up in 2014 at Edwards as the UK’s F-35 operational evaluation unit and is now embedded within the F-35 JOTT.  It is equipped with three F-35Bs, all of which are ‘orange wired’ with test instrumentation, which means they will probably always remain in the US and engaged in trials activity.

Cdr Ian Tidball, Royal Navy, is Officer Commanding No 17(R) TES, an appointment that reflects the true joint nature of the UK Lightning Force.  “It’s a real privilege to be selected to command an RAF squadron,” he told AFM in his office at Edwards.  “It shows that the UK Lightning Force truly is a joint organisation.”

With RAF and RN engineers being trained at Eglin Air Force Base, Florida, and pilots being similarly readied as an embedded element of Marine Fighter Attack Training Squadron (VMFAT) 501 ‘Warlords’ at Marine Corps Air Station Beaufort, South Carolina, the UK is building towards the stand up of No 617 Squadron ‘Dambusters’ at RAF Marham, Norfolk, in 2018. 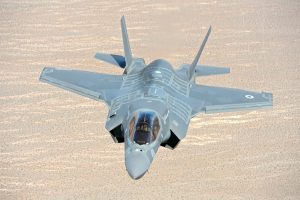 “We are the sole UK sovereign F-35 squadron at the moment,” explained Tidball.  “617 [Squadron] is still operating under US Marine Corps regulations at Beaufort and will continue to do so until they move back to the UK.  The maintainer schoolhouse at Eglin is also very much based on US policy.  The method in which we maintain our aeroplanes is a little bit different.  So, in addition to our test duties we have additional personnel from 617 and from 207 Squadron [the UK Lightning Operational Conversion Unit] who are here with us effectively receiving UK-specific training prior to returning to the UK in the summer.”

To find out more about No 17(R) TES operations, and about the UK’s future Lightning Force, look for the January 2018 issue of AFM, on sale now. 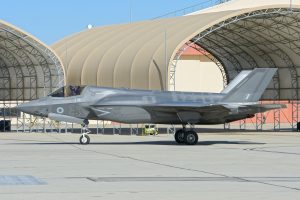