This new unit – the 18 Voyenno-Transportnaya Aviatsionnaya Diviziya (VTAD, Military-Transport Aviation Division) headquartered at Orenburg-2 air base (also known as Orenburg-Southwest), is actually a recreated Soviet-era unit. The original 18 VTAD (which was recognised as a Guards unit) arrived here from Estonia in 1992 and was disbanded in 1998.

The creation of the new 18 VTAD was officially completed on November 30, 2017. It has three subordinated transport regiments. Two of these are existing units – the local 117 Voyenno-Transportnyy Aviatsionnyy Polk (VTAP, Military-Transport Aviation Regiment) and the 708 VTAP, based at Taganrog-Central air base – both operating An-12 and Il-76MD transports. Its third regiment is yet another recreated Soviet-era unit – the 235 VTAP based at Ulyanovsk-Vostochny (Ulyanovsk-East) International Airport. In addition, 18 VTAD also took over the transport squadron at Omsk-Severny (Omsk-North) air base, operating An-2, An-26 and An-72 transports.

The 235 VTAP was officially established on December 1, recreating the unit originally based there. It received a squadron of ten Il-76MDs from 117 VTAP, nine of which arrived the same day, and it also took over an existing local separate An-2 squadron. Soon, in order to reach nominal strength (20 aircraft), the 117 and 235 VTAPs will start to receive new Il-76MD-90A aircraft built at the Aviastar-SP plant which is also located at Ulyanovsk-Vostochny.

An additional ceremony took place at Ulyanovsk-Vostochny on December 1, on the sidelines of the official 235 VTAP formation ceremony. Aviastar-SP is tasked with overhaul and modernisation of the Russian An-124 Condor fleet, so the presence of high-ranking VTA and VKS RF officials was a perfect occasion to unveil the modernised An-124-100 aircraft of the 566 VTAP from Seshcha air base. Now with full military titles and re-coded as RF-82011 (ex-RA-82011, c/n 9773054616023), it bears the name Oleg Antonov in honour of this famous Soviet aircraft designer.  Vladimir Trendafilovski 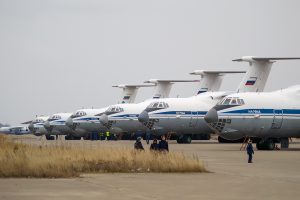 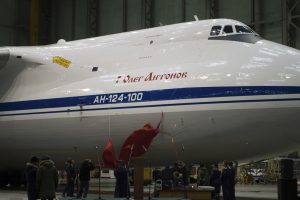 The official 235 VTAP formation ceremony was also used as an occasion to unveil a freshly overhauled and modernised An-124-100 at Aviastar-SP. Re-coded as RF-82011, this aircraft from the 566 VTAP from Seshcha air base (the sole VTA unit with An-124s) received the honorary name Oleg Antonov. Irina Teushchagova/MoD of the Russian Federation via author