Qatar signs up for 24 Typhoons

Photo: A Royal Air Force Typhoon over Abu Dhabi in the United Arab Emirates. With sales to Kuwait, Oman and Saudi Arabia, and a deal with Qatar now in the works, the Typhoon is fast becoming a dominant force in the region. Eurofighter/K. Tokunaga

Eurofighter looks to have secured another Middle Eastern customer after Qatar signed a statement of intent to buy 24 Typhoons.

The peninsular Arab country is in the midst of a wide-ranging modernisation and expansion of its air arm, the Qatar Emiri Air Force (QEAF).

The bid to sell Typhoons to Qatar is being led by BAE Systems and if the deal is concluded it will represent the UK’s first major defence contract with the Gulf state. It would keep the production line at Warton, Lancashire, active beyond 2019.

A deal could be finalised and signed in around a month.

Qatari interest in the Typhoon comes hot on the heels of deals to acquire fighters from France and the US: the Dassault Rafale and Boeing F-15QA, respectively.

On June 14 an agreement was concluded for the acquisition of 36 F-15QAs, a variant of the F-15E Strike Eagle tailored to Qatari requirements. The $12bn deal was signed in Washington by Khalid bin Mohammed al Attiyah and US Defense Secretary Jim Mattis.

The deal was signed amidst a diplomatic crisis that saw the country severing ties with much of the rest of the Middle East. Saudi Arabia and three other countries broke off diplomatic relations with Qatar on June 5. The deal also followed comments by President Donald Trump that described Qatar as “a funder of terrorism at a very high level”.

First details of this planned Foreign Military Sales deal were revealed when the US Defense Security Cooperation Agency (DSCA) announced on November 17, 2016, that US State Department approval had been granted for the Government of Qatar to purchase as many as 72 F-15QAs. Along with an associated weapons package and related support, equipment, and training, the estimated cost was given as $21.1bn. The DSCA notified Congress of this possible sale the same day. The deal is also to include US-based lead-in fighter training for the F-15QA. 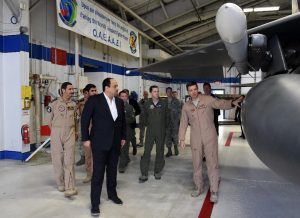 France’s Presidential office, the Élysée Palace, announced on April 30, 2015, that an agreement for the QEAF to acquire 24 Rafales had been reached the previous day during a meeting between the French President Yves Hollande and the Emir of Qatar. The following month the French President flew to Doha to witness signature of the formal contract for the aircraft on May 4.

The Rafale deal is worth an estimated €6.3bn and covers a firm order for 18 single-seat and six twin-seat aircraft, plus training of 36 QEAF pilots and 100 technicians.

Although a delivery schedule for the Rafales has not been officially announced, it is expected the first aircraft will enter service in 2018. 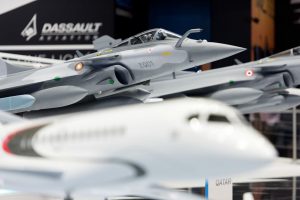 A model of a Rafale in QEAF colours at the 52nd Paris Air Show, which took place this June. Dassault Aviation/V Almansa

In the October issue, AFM begins an extensive survey of the air forces of the Gulf Cooperation Council, of which Qatar is a founder member.