Cover star of the AFM September issue is this special Royal Air Force Tornado GR4, painted in ‘desert pink’ colours as a tribute to Operation Granby in 1991. The popular jet has now been retired as the type enters its final chapter in service, as Rich Cooper reports.

In April 2019 the RAF will retire its last Tornado GR4s as they make way for Eurofighter Typhoons and F-35B Lightning IIs to spearhead UK combat air power. This summer, the time came for ZG750, dubbed ‘Pinky’ by many, to be retired. July’s Royal International Air Tattoo (RIAT) at RAF Fairford, Gloucestershire, presented the ideal opportunity to showcase this particular jet’s history and pedigree, with ZG750 being one of the stars of the show.

As the jet touched down at RAF Fairford it had just 10hrs of flying time left on the service log before being flown from RAF Marham, Norfolk – the last RAF Tornado base – to RAF Leeming, North Yorkshire, to be reduced to spares under the Reduce to Produce (RTP) programme. This successful project has cannibalised Tornados to help provide a cost-effective spares source with which to maintain the remaining machines in service.

See the September issue for full coverage of the final days of ZG750. 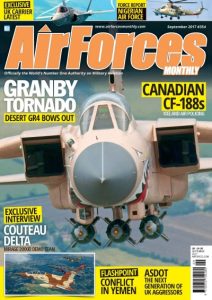