End of the line for No XV Squadron

Today saw the end of an era as the Royal Air Force’s No XV (Reserve) Squadron conducted its final flights at RAF Lossiemouth, Scotland. With this, the base bid farewell to Tornado operations.

Withdrawal of the RAF Tornado Force might still be two years away, but the first significant step towards the jet’s demise is now under way. On March 31, the Tornado Operational Conversion Unit (OCU), No XV(R) Squadron is to disband and the type’s formal training process will end.

The Tornado Weapons Conversion Unit was based at RAF Honington in Suffolk when it received the No XV (Reserve) Squadron title in 1992. It moved to RAF Lossiemouth in November 1993 and then with the closure of the Tri-national Tornado Training Establishment in March 1999 No XV(R) Squadron assumed responsibility for the training of all of the RAF’s Tornado GR4 pilots and Weapon Systems Operators in both initial training on the aircraft and in post-graduate courses. Over the past 24 years the squadron has been the life-blood of the front line, ensuring the squadrons were provided with combat capable aircrew. The final ab-initio pilot finished his training at the end of January, and the last refresher pilot, returning from a tour instructing at RAF Valley, graduated at the end of February.

The unit, which flew more than 2,200 hours last year, becomes the first casualty of the drawdown but leaves the Tornado Force in a good position. 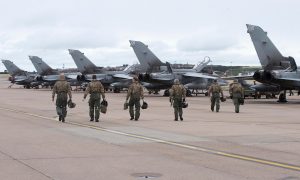 After the unit’s disbandment, the bulk of the squadron staff will be posted to RAF Marham to keep the front line going for the final two years of the Tornado.

Many of the groundcrew have been at RAF Lossiemouth for years, and a significant proportion will remain there. Those remaining will find plenty to occupy them with P-8 Poseidon and a fourth Typhoon squadron arriving at the Scottish base in the future. However, no one is currently sure what will happen to the XV number plate.

The squadron standards will be placed at the RAF Church, St Clement Danes, London, until a decision is made.

A full report on the final days of No XV(R) Squadron appears in the March 2017 issue of AFM. 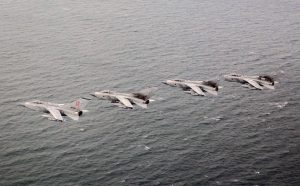 No XV(R) Sqn Tornado aircraft flying in formation for the last time, flying over RAF Lossiemouth and surrounding areas. Wg Cdr Froome OC of the squadron was flying the lead aircraft. Crown Copyright